The Northwest Detention Center is a private immigration prison in Tacoma, WA, operated by the GEO Group on behalf of the U.S. Immigration and Customs Enforcement. 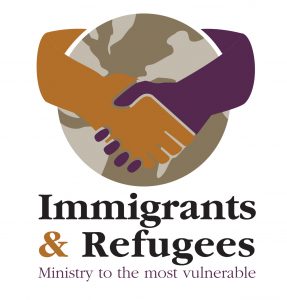 Until September, Esmeralda Saltos was the director of volunteers for the past five years. Although she has stepped back after recent personal family tragedies, her ministry to immigrant detainees continues to be a viable call and personal passion. She still volunteers twice weekly while orienting her successor, Father Isidro Lepez.

Esmeralda’s ministry began in October 2013. It didn’t take long for her then-chaplain supervisor to recognize her gifts and heart for the ministry. He encouraged her to become volunteer coordinator, which was co-sponsored by the Archdiocese of Seattle. At that time, there were only three volunteers to do four services a week.

Now 35 volunteers cover seven services weekly. But Esmeralda says, “We need more since the demand is great, and not all 35 are available to go inside on a regular basis. To me, it’s very important that services occur as scheduled, because this is church: a time for reading Sunday’s scriptures, reflection on them and sharing communion.” Also, of high priority to her is that detainees have something to take away from the readings — some word or image from the text to carry with them into the days and weeks ahead.

Among the detainees, “there is a great deal of sadness, so going to a prayer service makes a big difference in how they cope with their situation.”

Among the detainees, “there is a great deal of sadness, so going to a prayer service makes a big difference in how they cope with their situation,” she said. During services, chaplains invite detainees to take ownership of prayer as lectors (two readings and a psalm). Volunteer chaplains read and deliver a gospel message, then facilitate thoughtful discussion. Prayer services are held in Spanish, although French, Portuguese and some Asian languages are first languages as well. Many detainees have learned English, but for the uneducated fleeing parts of Central and Latin America, this is not the case.

GEO Chaplain Supervisor Keith Henderson screens, orients and trains new volunteers. Initially, there is a four-hour orientation seminar. Once accepted, the chaplain volunteer commits to an annual refresher and evaluation. A significant part of chaplain orientation revolves around fulfilling the terms of Prison Rape Elimination Act, which demands reporting of any signs of abuse or inappropriate behaviors among detainees, staff or volunteers.

Esmeralda shared that there is a disconnect: Detainees are not criminals, but they are prisoners who have broken laws. Not at all trivializing or diminishing the detainee experience, she reports the interior of the prison, though spare, is nice and clean. Hallways are adorned with artwork done by talented inmates. The large gymnasium-like space is configured into units with pods or common areas with round tables and chairs. A guard is assigned to each unit. Some detained sleep on bunks while others have small, private cells with doors. The center can hold 1,575 people. Detainees have access to clinical care and appropriate medications. She adds that in some ways this is better than living on the street, yet one of the hardships is to adjust to our overly processed food. Food seems to be the metaphor for the separation anxiety they suffer. “To have food prepared at home by the loving hands of a family member is something detainees are accustomed to; without it, they may not eat much.”

What chaplains can do when they encounter the undocumented in healthcare settings? Esmeralda was heartfelt and unwavering. “I would say to chaplains to attend to the family dynamic. As serious as an individual’s problems might be, there is always anxiety and concern about what will happen to the family should anything unfortunate happen to the (patient). And there’s the challenge of trying to balance the need for professional boundaries against communicating some genuine feelings, gestures and words of comfort. They have an opportunity to feel more at ease if they can just sense they are important to you. We’re here for love. So don’t be afraid to be close to Jesus in disguise.”

Maggie Finley, BCC, is a retired chaplain from Providence Hospice of Seattle.