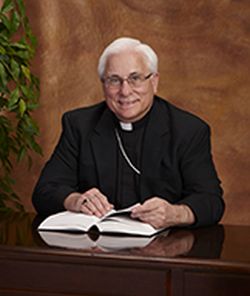 When Bishop Jeffrey Haines was doing his required unit of clinical pastoral education as a seminarian almost 40 years ago, he got to know many patients on the dialysis unit he visited regularly. One day as he was leaving, a woman thanked him for coming, and he said something polite in response, but she said, “No. You can’t understand what this means until you’re this sick and this isolated.”

He left that day thinking about the impact that a chaplain can have, and he has never forgotten it. That awareness will serve him well in his new role as the NACC’s new episcopal liaison.

Bishop Haines served as a priest of the Archdiocese of Milwaukee until he was elevated (“totally unexpected”) to auxiliary bishop for the archdiocese five years ago. His most recent appointment was as dean of St. John’s Cathedral, but he has spent his career in pastoral ministry, “not administration or seminary or the places where bishops come from.” That may be an indirect result of Pope Francis’ leadership, he said; many of his fellow recent appointees also come from parish backgrounds.

He looks back on his unit of CPE as “a great blessing. It was some of my first hands-on work in public ministry. Visiting patients and then talking afterward about which parts of your personality help and which parts get in the way – it was a very special experience.”

Bishop Haines’ connections to the NACC go back decades. He became aware of the organization in the 1980s when it was renting office space in St. Francis Seminary, and David Lichter, the NACC’s recently retired executive director, was his spiritual director as a seminarian. When his friend Bishop Donald Hying had to give up his role as the NACC’s liaison, he suggested him for the job, “and I was obviously familiar with what the organization is and what it does, so I said yes.”

Even before his liaison appointment, he knew from his bishop’s perspective that “we have to fight for access to healthcare sometimes, and also for access to jails and prisons. The NACC helps to open those doors.” At the national level, he said, “The NACC is in dialogue with the USCCB, and it runs every program through their offices, which I think is wise. We benefit from what we learn from them – new directions in ministry and where help is needed.”

But most of the country’s 200-plus bishops don’t have that awareness of the NACC, he said, even though they know of the need to extend the reach of ministry. He hopes to promote better connections, such as a prayer service that dioceses could use to commission new chaplains.

From his time pastoring a church in West Bend, WI, Bishop Haines remembered with respect the work of Sr. Donna Siegl, a hospital chaplain and former NACC member who “would give me updates, ‘I saw so many of your parishioners today,’ and she would give me the rundown. It made my life so much easier.”

His church at that time also trained 70 volunteers to take Communion to nursing homes, jails, hospitals, and the homebound – which echoes the NACC’s current hopes to offer more programming in non-healthcare settings and more entry points on the path to chaplaincy. Looking back, he said, “We would have loved to have that kind of support,” instead of starting a program from scratch. “It would be huge. It would help chaplains magnify their ministry.”

As Catholic institutions struggle to find qualified people to fill professional ministry jobs, “then the parishes will have to step up, and we have to provide resources or support.”

The Catholic Church’s current worldwide synod “is not just an event, it’s a way of being church,” Bishop Haines said. “We’re discerning together, not just as clergy but with the laity and the religious and everyone – and outreach to the periphery.” There is more awareness now, he said, “not just that we minister to people, but that they minister to us. My pastoral care volunteers would always say, ‘I get more out of this than I give.’ If the synod helps us grow in that, then we will be a better church.”

And the NACC has always contributed to that sense of dialogue. “We’re blessed to have this organization,” he said, “because they’re on the front lines.”