For the second time in two days, the NACC conference heard the story of the road to Emmaus. But as well as offering a theological message, Dr. Megan McKenna used the account as a lesson in the power of story. 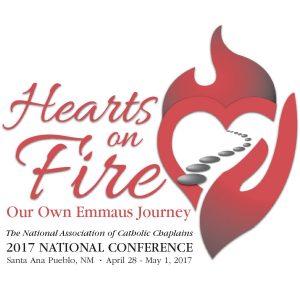 “All stories are true, and some actually happened,” said McKenna, speaking in front of the altar and podium. “They’re about creating community and conversation. They’re the glue that holds community together.”

For chaplains, and indeed for anyone, “You approach everyone in ministry with your story,” said McKenna, an author, theologian, storyteller, and lecturer. “There is only one story. How do you tell it? We believe life is stronger than death, forgiveness is stronger than violence. We forget that sometimes, so we talk about it as healing and meaning.”

But, she added, “Healing and curing are two totally different things.” Most people want to be cured, to have the problem removed, but healing offers spiritual peace. “We’re all going to die. We can’t get cured from that reality,” she said. “But healing is always there.”

The Emmaus story, she said, is a “Luke sandwich,” and considering only the famous middle part is like “trying to eat peanut butter and jelly without bread.” She told the story in three parts, using liturgical language to introduce each, and she urged her hearers to try to listen with fresh ears: “These stories are hard because you think you’ve heard them.”

McKenna sought feedback and reactions from the audience, and offered further commentary of her own. She did not condemn the male disciples for disbelieving the women’s account: resurrection is both scary and implausible, so “how long would it take you to believe that someone who is dead and buried is now alive?”

To explain the disciples’ lack of recognition, she said, “You work with people every day whose eyes are restrained from seeing Jesus. Grief fear, anger, suffering, betrayal — everything blinds us. Then the recognition of who Jesus is lasts that long (finger snap) and then he disappears. Then we go back and face all the realities we’ve been running away from.”

McKenna also shared a painting and poem that imagines a servant girl recognizing Jesus before the disciples did. “If we believe the risen Lord is here, we’re the servants,” she said. “But be aware that you’ve seen him before and you’ve heard his voice. You’re very good at listening.”

She continued, “The story begins when the teller stops talking. What do you do next? If you want him to stay, get together. You tell the story with others, you summon the presence of the risen Lord that stays and stays. There’s more power in this room than anything you’re doing separately. Look around. What does it look like? This is as good as it’s going to get.”