Our final gathering before the closing celebration of the Eucharist was the pastoral care panel discussion with David Lichter, executive director of NACC; board members Beth Lenegan and Carolanne Hauck; and Harry Dudley, the conference’s Outstanding Colleague Award recipient. 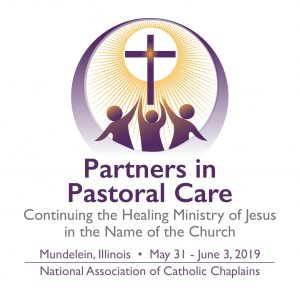 The point of this time together was to take an overall view of the conference and reflect on its theme, Partners in Pastoral Care. David shared two stories; the first was of his encounter in a Catholic hospital with a CPE resident. David asked the resident if he was a “Catholic chaplain” and the resident responded that he was a chaplain who happened to be Catholic. His point was that this is a great answer that speaks to the profession of chaplaincy.

David’s next story involved Bishop Dale Melczek, the NACC’s former episcopal liaison, and the controversy in the early 2000s around the terms “chaplain” and “lay ecclesial minister of healthcare.” Catholicism is our motivation, just as this conference has been our motivation, David said, and we are richer because of it. We bring it to other settings, and the conference is an important part of that.

Carolanne Hauck shared a story of her role with an interdisciplinary team as a chaplain in a NICU. Others on the team, including a physician, were initially dismissive of her role, but when Carolanne related the details of the board certification process and her continuing education requirements, she reframed her role completely for them. The physician began checking with Carolanne to see if he was appropriate in his professional relationship with patients. Carolanne became an important resource for that interdisciplinary team.

Harry Dudley drew the contrast of an “all or nothing” model versus embracing other pathways that consider candidates’ widely varied circumstances.

Harry Dudley, who was outside NACC but partnered with it in his long-time role with the USCCB, shared experiences of his work in lay ecclesial ministry. He praised the NACC’s development of competencies and certification, naming them “the gold standard.” But he challenged our organization to look at new pathways with these competencies, drawing the contrast of an “all or nothing” model versus embracing other pathways that consider candidates’ widely varied circumstances. Harry challenged the group to develop language around varying levels of competency, allowing someone to enter at one level to discern a call to chaplaincy and potentially grow to other levels. He sees great potential in NACC’s role to partner with other lay ministries within the church to help develop competencies and certifications in areas like prison ministry. Others looking from the outside wonder how to get into chaplaincy, he said. How can we make it work?

Beth Lenegan shared her story of being the first director of religious education in her parish, where she had a wealth of experiences with the bereaved, sick and dying. She initially explored CPE to grow her skills as a DRE — with no intention of becoming a chaplain. But she emphasized that people just like those at the panel discussion were the ones who mentored her into a change that she never anticipated. She invited and challenged those gathered to be inspiring mentors today, to share our knowledge and to inspire hope.

The participants discussed creative ways to make training for chaplaincy affordable. There was gratitude for the stories the panel shared and a suggestion for a Vision issue devoted completely to chaplains sharing their stories of discernment to this profession.