When Adrienne Boissy was a young neurologist, she got a late-night call to the bedside of a young woman who had been diagnosed with multiple sclerosis. Boissy took some time to look up everything she could find on the disease and walked into the patient’s room feeling prepared for anything. But the question that awaited her was, “I’m wondering if I should marry my boyfriend, so that when I can’t walk I’ll have someone to care for me.” 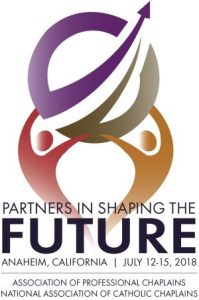 The doctor couldn’t answer that, of course, but they talked. “It was caring, not curing,” Boissy said during the final plenary session of the APC-NACC joint conference. “I can’t cure MS. I’m not clinically brilliant. But I do try to deal with the person in front of me, try to see their humanity, and that has shaped everything I’ve done.”

In addition to maintaining a neurology practice, Boissy is now the chief patient experience officer for the Cleveland Clinic, helping to set strategy for the prestigious system.

She told the story of a factory worker diagnosed with MS who developed a rare complication to the drug she prescribed. But when she walked into his hospital room, “amid agonizing sobs, he tells me his son has been murdered.” To an audible gasp from the audience, she continued, “The floor fell out from under us, and I felt complete despair. I hung onto him.”

She paused to compose herself. “The first call I made was to spiritual care. His son was actually still alive, but on life support at another hospital. We got him to the main campus, and they saw each other before he passed.” Speaking of the chaplain, she said, “Although I’m sure he prayed with them, what I most appreciate was he showed up. He didn’t shrink away from the darkness in that room. I feel deeply the intrinsic power you have and feel gratitude for how it has benefited me and my patients.”

“Do any of you know anyone who’s talented at advance care planning and end of life?” Boissy asked, deadpan.

She paused again. “I brought some Starbucks napkins just in case this happened, and then I didn’t bring them up here with me.” A chaplain from the audience ran them up to her in a quick gesture of pastoral care.

Boissy blew her nose and continued, “Now I’m going to talk about you.” She spoke about research that described how patients’ encounters with chaplains result in more satisfaction, higher quality, and lower cost. But, she concluded, “Why is it that the first time I heard of this is when I started Googling you in preparation for this talk?”

She described areas where chaplains make a difference, such as meeting with high-risk patients to discuss goals of care, end-of-life wishes, and healthcare powers of attorney. “Do any of you know anyone who’s talented at advance care planning and end of life?” she asked, deadpan.
In her younger days, Boissy did neurological research, “and I hated every single minute of it.” But when she became interested in patient satisfaction, she asked researchers to show her how to measure it.

At the Cleveland Clinic, she has led a system-wide effort to reduce feelings of burnout, which is epidemic among caregivers. But in trying to train 40,000 people, at first “we had no idea what we were doing.” Most doctors, she said, thought they were doing a great job of communicating. She recruited senior male surgeons to talk about empathy, knowing she’d need their influence. She also made sure all patient comments about clinicians were posted online, including the bad ones. “That shed some light on the blind spot,” she said. “You think you’re fantastic; your patients think something a little different.”

And during the course for Cleveland Clinic caregivers, she realized “we were creating a safe space for stories to come out. We had created vehicle for healing. No matter what (burnout) scale level you came in at, you got better.”

Chaplains, and all caregivers, “are facing a world where empathy and compassion are threatened,” Boissy said. “We must fight that. We are healers. And you, my fellow healers, have everything you need to step in and lead the charge on healing. Be much bolder. You stand with suffering others can hardly imagine. You open the door to the room no one else will go in. You come back the next day and the next. You have an opportunity to fit into the strategic agenda of every organization. … On behalf of every thank-you that never got said, I thank you for your incredible life-changing work.”