Four hundred chaplains gathered in Chicago to sing, talk, pray, learn, and socialize, to honor their profession and try to advance it, and to consider how to make all things new.

Conference task force chair Rod Accardi, who said that he came to his first NACC meeting 35 years ago, praised the task force for the nine months of work that went into the gathering, and noted that it had drawn chaplains from 47 states. 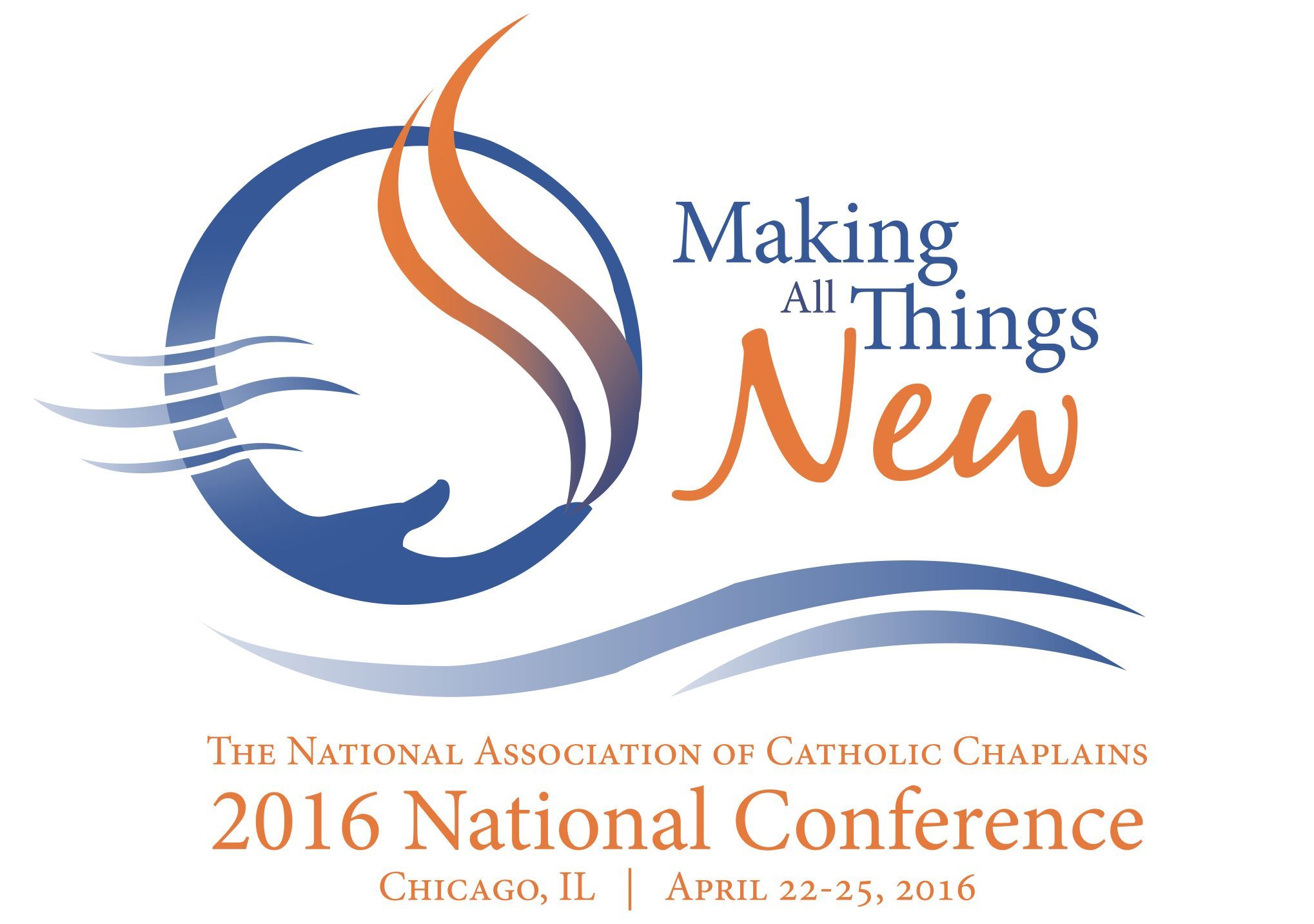 Bev Beltramo, who gave the reflection at the opening prayer service, said, “It was never, ever any plan of mine to be standing up here like this.” And most people in the room, she guessed, probably also felt similar surprises along their journey to chaplaincy. In the NACC’s 51st year, “there are many challenges and many questions we haven’t begun to ask. But we stand on a foundation of love and courage,” she said. “We may never have imagined the church as a door that would be open to us. But here we are.”

The altar cloth that made its debut last year, inscribed with the names of more than 500 deceased NACC members, returned to the conference this year, and candles were lit for those who have died since the previous gathering.

“I’m really impressed with the quality of the speakers,” said first-time attendee Erin McCarthy of Worcester, MA. In her long-term care position she has no other chaplains in her building, and “it’s really nice to connect with people.”

***
At the banquet Saturday night, former supervisor Sr. Cyrilla Zarek, OP, was greeted with cheers, whistles and a standing ovation when she was introduced as the first woman to join the NACC, in 1973.


“I have fulfilled my goals. God was so good to me,” said Sr. Zarek, who will be 88 in May. In retirement with her religious congregation, she maintains a ministry of prayer and presence. Several women, including some she had supervised or mentored, as well as strangers, came up to her after the banquet to thank her for her pioneering role. She and Fr. Dick Tessmer put together the forerunner of the Certification Commission in the 1970s to begin providing CPE. “It was rough,” she said, “but we loved what we were doing.” And pointing to the altar densely inscribed with the names of deceased members, she said, “I bet I knew half the people on that tablecloth.”
“The chaplain offers the listening ear and the caring heart of healthcare.”
— Sr. Mary Skopal, SSJ

Kay Gorka, manager of spiritual care at Providence Health in Spokane, WA, received the NACC’s Emergent Leader Award. Jane Mather, presenting the award, said, “If you’ve ever heard Kay laugh, that’s the best antidote you’ll ever hear to the belief that chaplains are sad.”
Sr. Mary Skopal, SSJ, director of pastoral care at Bon Secours Health System in Baltimore, received the Distinguished Service Award. “The chaplain offers the listening ear and the caring heart of healthcare,” she said. “Our presence shows that someone cares, and ultimately that God cares.”
The Outstanding Colleague Award went to the Supportive Care Coalition, an umbrella Catholic group that advocates for palliative care. “This is kairos time,” said executive director Tina Picchi, a certified chaplain who took a moment to reflect on her journey to being a national voice for spiritual care at the end of life.

Conference attendees got to choose among a wide variety of workshop topics during the four-day conference. In a discussion of spirit as a vital sign, Mary Elizabeth Allen encouraged chaplains to begin recording a patient’s spirit by asking them to rate it on a scale of 1 to 10, using the pain scale that has become widely accepted as a fifth vital sign. “We’re doing great on the body and better on the mind, but spirit not so much, if you ask me,” she said.

Allen said that all children’s hospitals have low Press-Ganey scores for meeting emotional and spiritual needs, and simply asking the question on a regular basis can help raise them. “If you have a will to live, it’s going to get you down the road,” she said. “Nurses see it.” It should be recorded on every shift with every patient, she said, on a 1-10 scale, or, for children too young to count, on a smiley-face scale.

She defined spirituality as the way we make meaning, sense and purpose of life, and the relation to self, others, the physical world, and the holy. “I can lay my hand on you, but it’s an inside job,” she said. “It’s between you and your creator.”

Joan Bieler and Jeanne Wirpsa of Northwestern University discussed their attempt to create an online community for chaplains, similar to those that exist among teachers for support and professional development. Their pilot project in 2013 and 2014 ran into institutional obstacles and did not attract a critical mass of users, and they concluded that an online community also benefits from having an offline component as well.

In a session on mindfulness, Kristie Zahn said that compassion fatigue differs from burnout, and hospital staff need to practice healthy boundaries. Finding someone to talk to is important, she said. Mindfulness takes attention, as does the willingness to love and forgive oneself.


The practice of joy is also important. Zahn said that at a Native American workshop, she was disappointed to learn that her power animal was a hummingbird. But the leader told her, “You don’t need the medicine of the mountain lion.” In contrast, she needed to think about the hummingbird, which flies from flower to flower and sees joy in it. “Where do you put your attention, your time, your energy? Take time for joy.”

In a workshop on end of life and bereavement support, Elizabeth Lenegan reminded chaplains not to use the famous “stages of grief” approach. It might have been useful 40 years ago, she said, but now we recognize that “when we put patterns to grief, we do an injustice to grievers.” The idea of “acceptance” is particularly problematic, she said; she prefers to think of it as “reconciliation.”
“Grief is work,” she said. “It’s the hardest work you’ll ever do in your life.”

During a workshop on charting, Jerry Kaelin said that in maybe 10 percent of cases, the chaplain will hear something that is important to tell the medical team. In that case, a narrative of five sentences or less is appropriate for the EMR. However, chaplains have different needs when communicating with each other from shift to shift, and the Epic system that Kaelin uses at Loyola University Medical Center has been customized to allow that.

In a Sunday workshop on compassion fatigue, Jim Manzardo and two colleagues from Lurie Children’s Hospital in Chicago described the debriefings that they conduct immediately after difficult cases — preferably during the same shift. The 15- or 20-minute gatherings include anyone on the floor who felt affected by the incident, and differ from critical incident stress debriefings because they include an element of ritual and they address both medical and emotional aspects of the case.