I have both witnessed and experienced moral distress many times as a chaplain. An example of the first was the patient who had deteriorated after open-heart surgery and developed gangrene. Doctors agreed there was no hope for his survival but his spouse wanted to “do everything.” Making a difficult situation infinitely worse and the source of moral distress, the patient’s spouse refused to allow him to receive adequate pain medication since it made him sleepy and she wanted to talk with him! 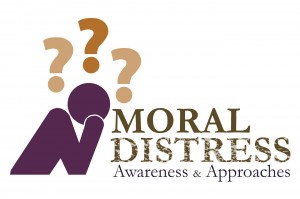 Although the threat of legal action is never a first response, this situation was ultimately resolved when the wife was informed she would be taken to court to permit appropriate palliative treatment, which would allow the poor man to die peacefully. She relented, eventually, and her husband ultimately died as comfortably as was possible.

Another memorable case involved a patient whose injuries resulted in a deficit of brain activity. The sources of moral distress for most of the clinical team were twofold: The patient’s family held out hope that God would grant them a miracle of recovery, and the attending physician would not speak frankly with the family.

The physician had an increasingly difficult time facing the combined weight of the family’s wishes, while specialists offered false hope (slight improvements in renal and hepatic function in a brain-dead patient are meaningless). There was more than enough moral distress to go around in this case, but it was especially evident in the nursing staff, who felt untold stress over a period of many days. Just when it appeared that all were locked in an endless struggle of wills, the patient coded and died. Sometimes God answers prayers in ways we don’t anticipate.

My own all-too-frequent source of moral distress has been the inadequate treatment options for alcoholic and addicted patients.

My own all-too-frequent source of moral distress has been the inadequate substantive treatment options for alcoholic and addicted patients. I have ministered in hospitals where the community resources available for these patients’ needs were woefully inadequate or even nonexistent.

Typically, such patients present with the symptoms of their addictive disease, but meaningful discussion by caregivers about the causes of and pathways out of active addiction are largely absent. I have seen the same patient admitted to an ICU seven times in one calendar year for the symptomatic effects of his alcoholism, without clinicians candidly addressing the root cause — interventions that might have interrupted the destructive cycle. Most addicted people’s denial is indeed powerful and the seeming hopelessness of some cases is truly daunting, but these never justify forgoing the ethical obligation to offer solutions to the sufferer.

This I have tried to do, wearing the dual hats of chaplain and recovering person. When the census shows the admitting diagnosis is connected to addiction, I have reached out in solidarity to the patients and offered them a way out of their spiral. I think of Moses’ blunt proposal to the Israelites: “See, I set before you today life and prosperity, death and destruction … Now choose life, so that you and your children may live.” (Deuteronomy 30:15, 19b) Sadly, many are so enslaved by their addiction that such interventions fall on deaf ears, and death will, directly or indirectly, sooner or later, be the result of their disease.

When I have addressed this clinical and ethical void with other members of the care team (physicians, nurses, social workers, and care managers), their responses have seemed to me short-sighted, inadequate, and morally mystifying. Acute-care facilities, I have been told, are not reimbursed for interventions to get at the roots of addiction. It’s rather like saying, “We only get paid for applying Band-Aids, so that’s what we do.” As a recovering person and minister, I experienced this line of reasoning as a clear violation of my moral integrity, and hence, the source of my moral distress.

I initially attempted to soothe my distress with self-talk — the likes of “There but for the grace of God go I.” This worked in the moment, but somewhat shopworn bromides did little to ease the cumulative effect of my internal discord. I found myself identifying with the nursing staff when confronted with my personal powerlessness in the face of moral distress. Had the institution assuaged its conscience enough to accept at a minimum indifference, perhaps even clinical nonfeasance? Like many nurses who have contemplated leaving their jobs or the field entirely as a way to preserve their personal integrity, I considered my options. “I’m a priest; there aren’t that many of us around anymore,” I reasoned. “If speaking up gets me canned, I won’t be without a job for long.”

On reflection, however, this line of thinking struck me as self-centered, and an easy way out. I have rarely thought of myself as a “prophetic voice,” but I am a chaplain because I think the Church must do a better job of taking care of its sick members. Reminding myself of those truths, I decided to do something. I hoped to improve our care of addicted patients, push that care more in line with institutional values, and perhaps even begin to resolve my distress.

I drafted a proposal to approach the addicted differently and submitted it to institutional leadership. The plan would establish a set of clinical “flags” that indicated clues about patients’ substance abuse and identified those whose admissions were related to their active addiction. A multidisciplinary team would then offer assessments, frank talk about their addiction and appropriate referrals.

Just the act of giving voice to my concerns alleviated a good deal of my personal moral distress. I hoped my proposal would be well-received, but my diminished distress did not depend on a positive institutional response or successful implementation. Happily (for addicted patients, especially), they listened. And acted. And — I’m still a chaplain.