Veteran Vatican reporter John L. Allen Jr. offered insights into the Francis papacy during the closing plenary session of the NACC national conference. Pope Francis “is today by far the most popular religious leader on the planet, and one of the most popular leaders of any sort,” he said.

“This Holy Father, like John Paul II before him, is an absolute magnet for humanity,” he said. Recalling that Pope Francis drew a crowd of 6 million people last January in the Philippines, an incredulous Allen added, “And there was a typhoon that day.”

“There is something so electrifying about this figure, a ferment around him that is so palpable, that any attempts to bottle it up or fence it in are going to fail,” said the former Vatican correspondent for The National Catholic Reporter. Fresh from publishing his 10th book “The Francis Miracle: Inside the Transformation of the Pope and the Church,” Allen provided chaplains with insights gained from his 20 years of covering the Vatican and three popes.

“I am by training and experience what Italians call a Vaticanista,” said the associate editor of The Boston Globe and its new Catholic-news website, crux.com, “which means that it is my full-time professional work to keep my eyes on the pope.” 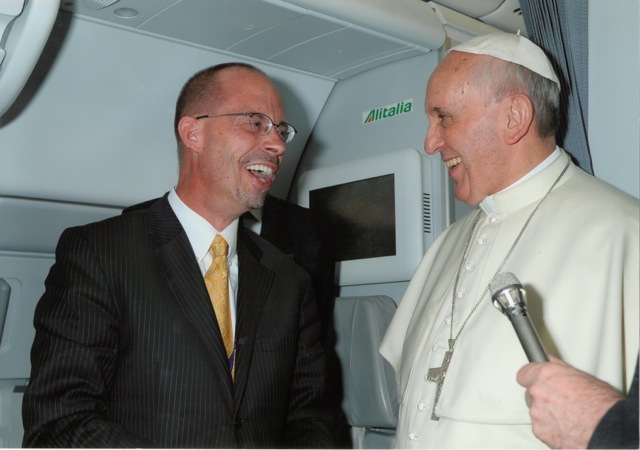 Those principles, he said, are leadership as service, a deeply missionary conception of the Church, and mercy as the core Christian message.

In the days after Francis’ election, it was the pope’s gestures of “personal simplicity and humility that captured the imagination of the world” — from asking people to pray for him, passing on a limo to take the bus, and driving a used 1984 Renault, to shunning the papal apartments, and paying his own hotel bill. But, Allen added, “Beneath that simple exterior lies the mind of a brilliant Jesuit politician. This pope knows what he is doing at all times. He has a game plan … there is always a plan.

“Fundamentally, what Pope Francis wants is that when people see the symbols of authority in the Catholic Church, he wants them to think instinctively not in terms of power or privilege, but instead in terms of service.” And he wants all in administrative authority, “anyone who speaks on behalf of the Church,” to do the same.

Second, Allen said, the pope sees himself fundamentally as a missionary. “He wants to be the missionary-in-chief of the Catholic Church,” he said. Among mantras the Pope uses, he said, are he “wants to stimulate the Church, he wants to light the fires of the Church, to get it out of the sacristy and into the street, making itself relevant in the lives of real people.”

“He has blasted the globalization of indifference to migrants and refugees” and what he has described as “a throw-away culture” in which whole categories of humanity — the elderly, the infirmed, immigrants, the poor, the unborn — are regarded as basically disposable, said Allen.

The third pillar is that “mercy is the core Christian message.” Allen noted that a signature phrase that has emerged from this Francis papacy is “The Lord never tired of forgiving.”

“Mercy is this pope’s motto,” he said, pointing out the pope’s passion for the sacrament of confession. “My prediction is that Francis will be remembered as the pope of mercy,” and it’s reflected in everything he’s been doing, from reform of the Vatican bank to pastoral care for the divorced and remarried.

Allen Honors the Gift of Chaplaincy

Sixteen years after his own encounter with the ministry of chaplaincy, John Allen honored the profession’s gift during his speech.

“In my experience, chaplains are a bit like lawyers,” said Allen, “in that you never really appreciate them until you actually need them.”

In January 1999, he said, his 62-year-old mother was in a hospital in Kansas dying of emphysema, and a lay chaplain guided him through the process. “At the time, I wasn’t particularly appreciative,” he admitted. “I thought it was a bit intrusive.” But looking back, “It was clear to me that I would have been a complete shipwreck without the kind of steadfast decency and kindness and interest and keen unwavering belief that God’s mercy somehow was at work in this horrific experience that I was living.

“In the end, when my mom finally passed, I was so overwhelmed … I never really had the opportunity to thank this chaplain.”

Allen continued, “As somebody who has been in the trenches, who has seen what you do and how profoundly important it is, I want you to hear these two words from me this morning and I suspect they are two words you do not hear nearly often enough. And those two words are ‘Thank you.’ Thank you for who you are and for what you do. …

“I know that on my best days, I chronicle the life of the church; but you are the people who make it come alive. I know that without you out there standing with people in their most vulnerable, their most broken, their weakest moments, and extending the loving hand of God to them, that all this great talk about the mission of the Church would signify nothing. So ladies and gentlemen, please hear me from the bottom of my heart: thank you, thank you, thank you.”