Few people think much about the spirituality of administration, which may be why Ann Garrido had an attentive audience for her plenary speech at the NACC conference.

Garrido, a professor of homiletics at St. Louis University, now spends much of her time in office work, and considering the meaning of her work led her to write “Redeeming Administration” in 2013. She told the assembled chaplains that in her past she had done one unit of CPE, but “much of my day is now spent at a computer making tables and charts,” which drew a rueful chuckle.

Administration is “not what I’d been prepared to think of as a ministry,” she said, and she was shocked to think that maybe this was her mission. And there are few examples to draw from — the exhaustive theological library at her university, she said, has five floors of books, including one about “a man who sat on top of a pole for 30 years, but very few examples of people who followed this kind of work.” It is seen as something that “takes us away from what we thought we’d be doing, what called us into ministry in the first place.”

Garrido found some comfort when she considered the Latin roots of the word — “ad” means to or toward, so “administer” can be “toward ministry,” the thing that enables ministry to happen. But defining spirituality, she said, was harder. Most books implicitly associate it with silence and reflection — but “God loves stuff,” she said, and “the stuff of daily life can be revelatory.” She concluded that spirituality is “the particular way that God is working out my salvation in this world.” But even so, the question remains that in the middle of email, schedules, budgets, and meetings, “how is God working in them?”

Administrators, she said, “know stuff,” have a sense of the institution and how the parts fit together. Like God creating the world, they can create an environment in which people can flourish.

A survey of administrators, she said found that they feel they have too much responsibility, and too little authority to make changes. “Does that resonate with you?” she asked, and got nods in return. But, she said, that situation offers “a more authentic picture of yourself. If CPE didn’t do that for you, your job now will.” Whatever a person’s flaws may be, they will be seen, but “humility is not putting yourself down; it’s knowing yourself truthfully.” 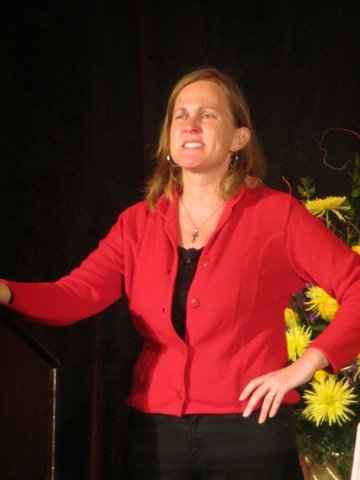 Administration requires courage, too, but “the gap between me and what the role requires will be filled by the Holy Spirit,” she said. “Just because it’s a furnace doesn’t mean I can’t live here.”

“In administration, you die a thousand deaths for the good of the whole,” Garrido said, such as the death of one’s own ego, control, or productivity. She told of a conversation with a mentor whom she relied on, and was startled to realize that the mentor also relied on her. “I’m here because of you, and you’re here because of me,” she said. “But that’s the way it’s always been. … God, in God’s very being, is relationality.”

During the question period, Garrido said that she defines “management” and “administration” similarly, but “leadership” is different; it involves setting a vision that administration carries out. “I’m not aware of any freelance administrators,” she joked.

Whatever the job, it is important to see it as a ministry, she added. “The way we preserve our Catholic identity is in how we answer the phone, how we send an email,” she said. But she worried about the decline in vocations of priests and sisters whose “spirituality permeated every fiber of their being.” As lay people have moved into more important Catholic jobs, “there is a tremendous heritage that we have yet to fully allow to permeate our own lives.”

Finally, Garrido warned, “Be careful what you pray for. … How will you grow in patience unless you’re in a situation where patience is required? Now I just pray to God that God’s will be done — if you could just be gentle. And be gentle with yourself.”