Fifty years after the close of the Second Vatican Council, the National Association of Catholic Chaplains is no longer an experiment, Fr. Joseph Driscoll said.

Driscoll, returning to an NACC gathering for the first time in 12 years, addressed the conference on the implications of a church in which ministry is open to anyone who is baptized rather than ordained —implications that continue to evolve.

When Pope Francis was elected two years ago, Driscoll said, “he asked the world to bless him before he blessed the world. Remember that?” Driscoll recalled praying that night, “Lord, I asked you for this, but I didn’t think you could do it.”

In the course of discussing mission and ministry, Driscoll said he often asks, “Who believed in you?” One student, he said, answered, “My bus driver,” recalling her childhood in rural Kentucky. “If that man ever knew how important he was in her life,” Driscoll said, “that’s where we get our sense of vocation.” 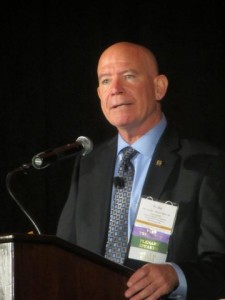 The closing of Vatican II in 1965, the same year the NACC was founded, may be seen as an auspicious coincidence, but the NACC had to work long and hard to catch up to its peer organizations. “I believe there was an experiment in the church,” Driscoll said, “and it was the NACC. But I don’t think those men, and they were men, had that design in mind.”

The association evolved in succeeding years, as sisters and laypeople were accepted into its ranks. But across the entire church, the ’80s and ’90s were times of retrenchment and struggling to hold onto the changes that had occurred.

Driscoll told many stories about his time as president of the NACC from 1992 to 2003, as he advocated to bishops in the United States and Rome for acceptance of lay chaplains. “Most bishops were delightful. Most appreciated the work we did,” he said. The late Cardinal Joseph Bernardin of Chicago, Driscoll said, told him that chaplains should be able to anoint the sick, but “it’s not going to happen easily.” Another unnamed bishop, he remembered, once said, “Hell, Joe, (chaplains) should be giving absolution. They listen to all the confessions anyway.”

But at one point, he said, he got a letter from the Vatican that would have effectively dissolved the NACC. He lobbied the board of the USCCB to intervene, telling the roomful of bishops what would be lost without the ministry of spiritual care. There was a long silence before one of the conservative bishops asked, “Joe, what can we do?”

“In that moment of silence,” Driscoll said, “the hierarchical church saw the gift of Lumen Gentium … and recognized it, even the most conservative among bishops.”

The answer to the bishop’s question, it turned out, was to separate certification (for the NACC) and ecclesial endorsement (for the local bishop). Paraphrasing the landmark Vatican II document Lumen Gentium, Driscoll called the NACC “a bright light on the countenance of the U.S. church” and “the greatest experiment in Vatican ecclesiology.”

In response to a question about the role of women in the church, Driscoll said, “What gives me hope is the women I see in this room. You’ve hung in there.”

Looking ahead, Driscoll said that at one time he had hoped that the NACC could merge with other spiritual care organizations, while at the same time retaining a Catholic identity. Another possibility, he said, might be joining the CHA.

The association’s progress, he said, “was the design of the Holy Spirit. … Trust the joy of the Spirit.” Speaking of the decline in the number of priests, he said. “You think the Holy Spirit is not working in the shortage?”