“Meet Me in St. Louis,” and attend the annual conference of the National Association of Catholic Chaplains! I am so excited that NACC has chosen the “Gateway to the West” for its May 17-20, 2014, meeting. There is so much to see and do in St. Louis. I hope you can find some extra time to visit.

Our conference will be at the historic St. Louis Union Station, a National Historic Landmark. Once the largest train station in the world, go back in time to 1875 and create memories of your own. While there, take a friend to visit the Whispering Arch. Whether you love trains, history or are a hopeless romantic, a tour of this grand building will transport you to a former time. 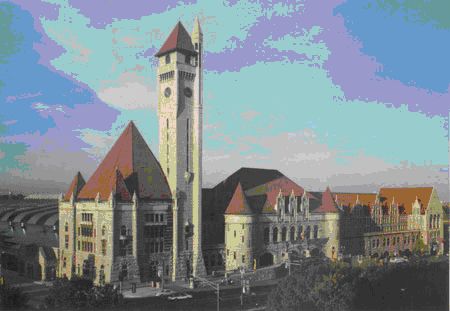 St. Louis, often referred to as the “Rome of the West,” is steeped in Catholicism. St. Louis is home to DePaul Health Center, the first hospital west of the Mississippi and the longest continuously running business in St. Louis. The Daughters of Charity of Vincent de Paul travelled to St. Louis by horse in 1828 to create the original hospital — a four-room log cabin that was located not too far from the Arch grounds. Two hundred fifty parishes, schools and agencies call the Archdiocese of St. Louis home. If you can arrive early or leave late, attend the 12:05 p.m. Mass at the Old Cathedral on the Riverfront, or take a tour of the Cathedral Basilica and its mosaics.

The 1904 World’s Fair, the Louisiana Purchase Exposition, left a mark on St. Louis and its history. New foods introduced included the hamburger, hot dog, iced tea and ice cream cone. The architecture was grandiose. Two buildings still stand from the Fair – the Bird Cage at the St. Louis Zoo and the St. Louis Art Museum, both located in Forest Park. Many museums in St. Louis are still free to enter – the Art Museum, History Museum, Science Center and St. Louis Zoo, among them.

A song from the 1970s said that St. Louis has it all, from A-Z, and I hope you find that to be true. If it is art that your spirit needs, the St. Louis Art Museum covers a large expanse of Forest Park. The Kemper Museum at Washington University, the Museum of Contemporary Religious Art at St. Louis University and not far from there, in Grand Center, the Contemporary Art Museum and the Pulitzer Foundation for the Arts, offer art from centuries past to present-day pieces. If you like sculpture, Laumeier Sculpture Park, Sunset Hills, and Citygarden, downtown, offer architecture, water, plantings and design. “Man’s best friend” is depicted in art in a major way at the American Kennel Club Museum of the Dog, located in Queeny Park, not far from a Frank Lloyd Wright home.

St. Louis, often referred to as the “Rome of the West,” is steeped in Catholicism.

If you would like to take some time to relate to nature in order to deepen your relationship with God, the Dog Museum, St. Louis Zoo, Grant’s Farm (yes, General Grant), World Aquarium at the City Museum, Purina Farms in Gray Summit, Endangered Wolf Sanctuary, World Bird Sanctuary, Butterfly House (visit the Carousel for a spin right next door), Lone Elk Park, Mastodon State Historic Park, Powder Valley Conservation Area and Suson Park provide a connection with the creatures who share our planet. Flowers and plants also abound at the St. Louis Botanical Garden, home of Henry Shaw, the Shaw’s Garden Arboretum in Gray Summit, the Jewel Box in Forest Park, Forest Park and Tower Grove Park. They provide colorful spaces for contemplation. And, just outside our hotel, you will be able to feed goldfish in a lake surrounding the Hard Rock Cafe.

Theater is present in St. Louis! As we get closer to the conference weekend, I will provide information on evening entertainment. We have the largest outdoor theater in the world, the Fabulous Fox, and several smaller venues. The St. Louis Symphony is also world famous. And it is possible Chuck Berry will be playing in the Loop at Blueberry Hill.

Yes, we have sports – the Rams, Blues, basketball, golf and the St. Louis Cardinals. The baseball schedule for 2014 is not posted yet, but there are bound to be games here during our conference – maybe with your own home team. 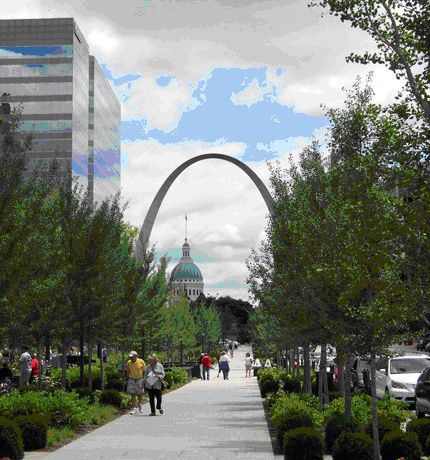 The Science Center has a beautiful planetarium and so much more. Anheuser-Busch, a brewery tour, the Magic House, Holocaust Museum, Kemp Auto Museum, Jefferson Barracks National Cemetery, Old Courthouse – site of the Dred Scott case emancipating slaves, all offer special exhibits for things that might interest you.

Two hundred years ago, the explorers Lewis and Clark set out on their great journey. Today, the Gateway Arch stands as the iconic monument symbolizing the westward expansion of the United States. If you’ve never seen the grandeur of this architectural wonder or the breathtaking views of St. Louis from 630 feet in the air, now is your chance. And you can visit the Museum of Westward Expansion at the base of the Arch.

I hope you embark on a great journey to St. Louis to feed your spirit. As you prepare, if I can provide information or assistance, please contact me. I am happy to help in whatever way I can!

Angie Vorholt-Wilsey, who lives in Florissant, MO, is local arrangements co-chair for the 2014 NACC National Conference in St. Louis, MO. She is also coordinator of compliance with the Safe Environment Program in the Archdiocese of St. Louis, a position she has held for nearly four years. Formerly director of pastoral care at DePaul Heath Center in St. Louis, Ms. Vorholt-Wilsey finds her pastoral skills are put to use each day in her current role.