Home » Vision » March-April 2013 » Research in chaplaincy: Where we are now, and where we are going

This article is written in conjunction with an article in this same issue of Vision by George Fitchett. The reader is advised to read George Fitchett’s piece first to get an overview of how chaplains have come into research, what the overall goals might be for chaplains in research, and what some of the steps might be to develop research on the efficacy of spiritual care and chaplaincy care.

In this piece, I will focus on two ongoing lines of research in which chaplains are central as case examples of both the different forms that research in this field might take and how chaplains might be involved. The first began with the National Consensus Conference on Improving the Quality of Spiritual Care as a Dimension of Palliative Care, also known as the Archstone conference, after the event’s sponsor, held in February 2009 in Pasadena, CA, and the second is a line of work conducted by HealthCare Chaplaincy and funded by the John Templeton Foundation currently operating under a project titled, “Staking a Claim: Setting the Strategic Research Agenda for Chaplaincy Care in Health.” 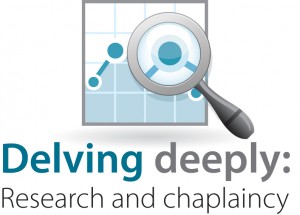 There are several take-home points common to these two projects that are important for chaplains to understand.

This consensus conference was convened to expand the recommendations of the spiritual domain in the guidelines on providing palliative care issued by the American Academy of Hospice and Palliative Medicine. These guidelines are major drivers of other policy guidelines in palliative care so have a significant ripple effect on how palliative care is delivered. (Note: That goal will soon be achieved with the issuance of new AAHPM guidelines with a greatly expanded spiritual domain.) Guideline development is a type of research and the guidelines that result do count as evidence to make a scientific point. The participants represented a wide array of disciplines and faith traditions including a number of chaplains, one being Karen Pugliese, past chair of the NACC Board of Directors. As mentioned above, the process proved difficult for some of the chaplains present who were not comfortable conceding to other disciplines on such matters as a definition of “spirituality.” However, the strength of that buy-in across disciplines was that the result had much more widespread credibility than if only chaplains had produced it. The conference results were published as a journal article that received worldwide circulation and interest (Puchalski, et al, 2009).

Virtually all good research is done by teams. The good news here is that you as the chaplain don’t need to be a super researcher, or even a not-so-super researcher. However, you need someone on your team who is.

The conference produced a model for the delivery of spiritual care. Subsequently, the Archstone Foundation has funded nine demonstration projects to test this model. Each project was required to have a board certified chaplain involved. Those projects wrap up early in 2013 and will produce significant evidence for how to deliver spiritual care and more questions to be tested. This project is a major contribution to the field and has already provided significant evidence for the efficacy of chaplaincy. However, it is important to note that the elapsed time from inception of this idea to the production of the first results for the delivery of chaplaincy care will be about five years. There is an interim report available that mainly reports on process issues (Otis-Green, et al, 2012). Also, having heard some of the interim reports, the chaplains involved were unanimous in their perception that the time involved was significant and, in many cases, more than they had anticipated. Thus, this project has made a major contribution to our field but required significant commitment over a substantial period of time to get there.

The project will have a final convening meeting in Los Angeles on March 6-7. It is open to the public and features prominent faculty. For more information contact Andrea Garcia at angarcia@coh.org.

This project began in 2010 with a year-long funded planning process called “Testing the Efficacy of Chaplaincy Care,” mainly aimed at gathering together the existing “evidence” for chaplaincy and documenting gaps in that evidence as a prelude to future research. Given the lack of research expertise within professional chaplaincy, only two of the eight members of the planning group were chaplains. The reality was that the future of the project depended on having the most complete and reliable evaluation of the current evidence in the field. The process was modeled after a similar process in the United Kingdom (Mowat, 2008). The project resulted in two publications that can now guide chaplaincy care research well into the future (Galek et al, 2011 and Jankowski et al, 2011). Thus even the planning grant helped move the field forward. Most importantly, it resulted in a $3 million grant from the John Templeton Foundation that is currently funding six projects to help establish the efficacy of chaplaincy care and the development of a cohort of chaplain/researchers, which will begin to establish a research culture within professional chaplaincy. Each project is required to have a board certified chaplain on the team.

In the process of doing this project, we have learned some valuable lessons about chaplaincy involvement in research. The biggest mistakes we see chaplains making are believing that they need to have significant research training to do research and trying to do research on their own. The secret to both of these issues is to seek out and form alliances with researchers either in or even out of your institution. You might be able to find good researchers in the psychology or sociology departments of a local college. Also, like most chaplaincy types, we believed that not many researchers would be interested in these topics. That assumption turned out to be false. It turns out that many researchers are interested or could be interested but they don’t understand how to approach this area and need someone like a chaplain who can be the spiritual care expert on their team

Mowat H. (2008). The potential for efficacy of healthcare chaplaincy and spiritual care provision in the NHS (UK). Yorkshire and the Humber: National Health Service, UK.