In response to Hurricane Sandy, I was asked to go to the Red Cross National Headquarters in Washington, DC, to help support the Disaster Spiritual Care (DSC) ministry that was being offered by our chaplains in New Jersey and New York. Prior to my arrival, Tim Serban had recruited Red Cross DSC trained chaplains from across the country to assist in the relief effort. These chaplains put their lives on hold and committed the next two to three weeks of their lives, sacrificing being with their families over Thanksgiving, in order to be of service to the survivors of this devastating storm. 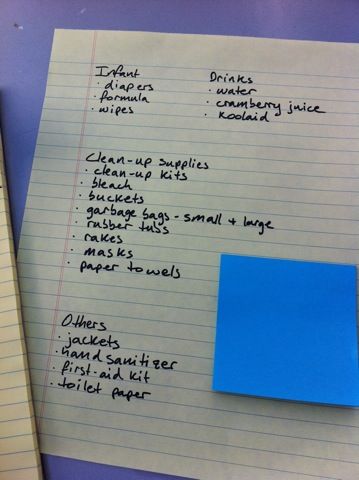 The relief effort was well under way when I arrived. Tim had already recruited a second wave of chaplains to replace the initial group of chaplains, whose deployment was nearing an end. My role was to serve as a liaison between the team chaplains in both states and the Red Cross National Office, helping to communicate information about the status of the relief effort and to assist with any needs that they had with regard to their ministry and care.

Being at the national office, I had the opportunity to see firsthand the incredible work that the Red Cross does on a national level to respond to tragedies and disasters. As you can imagine, providing relief and care in areas that have been completely devastated can be an overwhelming task. In addition, coordinating that effort with a variety of government agencies, thousands of volunteers, and other relief resources, takes incredible organization and communication. I was so impressed by the dedicated and compassionate women and men who work and volunteer with the Red Cross. As an American, I’m proud that we have such an altruistic and humanitarian organization.

I’m also proud of the important role that our Disaster Spiritual Care chaplains have in the Red Cross. Their ministry to the survivors of this terrible storm was remarkable. Small in number, their teams consisted of 10-12 chaplains in both states, yet their ministry touched thousands of people.

I’m also proud of the important role that our DSC chaplains have in the Red Cross. Their ministry to the survivors of this terrible storm was remarkable. Small in number, their teams consisted of 10-12 chaplains in both states, yet their ministry touched thousands of people. In addition to offering condolence visits to families in grief following the death of a loved one, they walked in neighborhoods and entered high-rise apartment buildings, seeking out those in need. Our chaplains also ministered to Red Cross staff and volunteers, providing spiritual and emotional support to the caregivers. Often, staff and volunteers would intentionally seek out a chaplain, just to talk and process all that they had experienced in being with the disaster survivors. They did what chaplains do; they listened with compassion and offered spiritual comfort and service to those in need.

You often hear chaplains describe our ministry as being a privilege; that we are truly on sacred ground when we are with people in need. By supporting the chaplains who ministered in New Jersey and New York, and being with the Red Cross staff in Washington, DC, I can truly say that I, too, was privileged to have served in response to Hurricane Sandy as a chaplain with the Disaster Spiritual Care of the American Red Cross.