For many years, a furry creature has roamed the halls of Mount St. Joseph Holistic Care Center in Waterville, ME. The creature is Jessi, a 16-pound Maine Coon cat. Jessi’s fur is sable brown with streaks of black. He has a pink nose, white cheeks and bib, and four white paws. Jessi’s job is to visit the residents at the long-term care facility. Seven days a week, he saunters down the hallway, tail raised high like a flag, making his rounds. 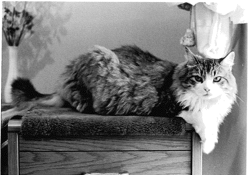 Jessi’s job is important. He is a companion and friend to the residents, many of whom left behind a beloved pet when they came to the facility. One resident, Beatrice, still misses her cat, Casey. On her bedside table is a photo album of the pewter-colored Himalayan cat.

“I had to give Casey away when I got too sick to care for him,” she said. When she came to Mount St. Joseph, she was thrilled to meet the friendly feline. “Jessi visits me every Saturday,” she said. “He comes when my son visits.” At first, her son would look for Jessi and bring the cat to his mother’s room. Now Jessi just comes by around 6 p.m. on Saturdays. “I don’t know how he knows it’s Saturday,” she marveled.

Jessi chooses his own schedule and routine. He likes to play with strings in the morning, rest in the enclosed courtyard in the afternoon, and have his neck and ears rubbed anytime. One never knows when he might stroll into a room, looking for a sunny window, a soft bed or, better yet, an open closet to nap in. Being 10 years old, he naps a lot on the job.

There’s another important aspect to Jessi’s work. When someone is seriously ill or dying, he keeps a bedside vigil, stretching out next to the person or keeping watch at the foot of the bed. Somehow he senses this important change and, along with the family and staff, he cares for the resident.

When someone is seriously ill or dying, he keeps a bedside vigil, stretching out next to the person or keeping watch at the foot of the bed.

Mr. Woodbury spoke about Jessi’s bedside vigil when his mother was dying. “I was unable to be there through the night,” he said. “But I knew Jessi was sleeping by my mother’s side. I could go home at night in peace, knowing Jessi was there in my place.” For three days and nights, Jessi kept vigil. He never left Mr. Woodbury’s mother’s side, even when the nurse’s aides would change the bedding or turn the resident. When Mrs. Woodbury passed away on the fourth day, as the morning rays broke through the darkness, Jessi jumped off the bed and left the room. His work was done.

Jessi’s job description is multi-dimensional. He visits the lonely and comforts the dying. He lifts the spirits of residents and staff. He knows when residents are allergic or not cat-friendly; he never imposes himself on others. He takes a lot of naps. In exchange for his work, he receives room, board and medical coverage. He doesn’t receive a salary. But Jessi has what money can’t buy – friends who love him, meaningful work, and plenty of time for rest and play.

This article, originally published in The Town Line, South China, ME, was written by Sandra Lucas in beloved memory of Jessi, who died in 2006 after bringing joy to countless residents, families, and staff. Ms. Lucas is a member of the NACC’s Editorial Advisory Panel.