(Note: This information was published in 1975 as A History of the National Association of Catholic Chaplains, researched and written by Catherine Elliott).

For many years, the Catholic Chaplaincy had no formal organization. Some chaplains were members of the Conference of Catholic Hospital Chaplains of the Catholic Hospital Association, which met on the occasion of the annual convention of the CHA. In addition, there were small, regional, unrelated groups throughout the country, but for all practical purposes, there was no real national chaplains’ organization.

In 1964, the Bureau of Health and Hospitals of the former National Catholic Welfare Conference (NCWC) considered the formation of a chaplains’ association. This action was largely the result of the planning and encouragement of Monsignor Harrold A. Murray, then Director of the Bureau, and other interested bishops and priests. Monsignor Murray had served for 10 years as a part-time hospital chaplain in a community hospital and recognized the chaplains’ very special ministry. He also recognized the need for upgrading standards, providing training and certification and helping the chaplains gain greater prestige.

The Administrative Board of the NCWC considered the formalization of a national chaplains’ organization along with the development of training programs. In April, 1965, the Board approved the establishment of the National Association of Catholic Chaplains (NACC). It was to operate under the auspices of the Bureau of Health and Hospitals with Monsignor Murray as its Executive Director. It was given financial support by the NCWC for its operating budget and was to concern itself primarily with establishing a training course for hospital chaplains. An application for charter membership was designed and a statement of purpose was written. That statement reads as follows:

During 1966, all Ordinaries were contacted and requested to supply information on the chaplains in their dioceses. With that information, individual chaplains were contacted and the membership began to grow. A 12-member Advisory Board was formed with Monsignor Murray acting as its Chairman. Its function was to direct the activities of the Association and plan its future. The Board composed a Statement of Understanding, Criteria for Certification, relationships with other chaplains’ groups and a curriculum for the orientation training program.

By the end of 1966 there were 784 members of the Association of whom 461 were certified under its “grandfather clause.”

During this year preparation was begun on a manual offering guidelines to the chaplains and describing the status and duties of the hospital chaplain.

A significant event for the NACC during its first year was its first Annual Convention. This was held June 14–15 in Cleveland, Ohio, and attracted 140 priests. Increased formalization of the organization took place in this year and the minutes of the Advisory Board reflect this. There was a concentration on establishing curriculum for training courses, designing proper application forms and a general emphasis on establishing the NACC as a permanent, on-going organization.

By the end of 1967, the Association was beginning to have a significant impact on chaplaincy in this country. The Advisory Board had met four times and had prepared documents recommending qualifications necessary for Diocesan Directors of the Hospital Apostolate and requirements for the position of “Chaplain Supervisor.” The manual Apostolate to the Sick was published in this year and the Association’s first Executive Secretary was appointed, Father Michael J. McManus of the Archdiocese of Washington, D.C.

During 1968, the Association began to develop into a recognized, professional organization. It had set standards for certification of chaplains in both general and mental health care institutions. It was actively distributing its manual and had begun the publication of a quarterly journal, the Camillian. Its mailing list had grown and the minutes of meetings of this year reflect a growing enthusiasm on the part of all its members. With confidence in the importance and future of the NACC, the Advisory Board actively publicized its existence to state and military hospitals and published information on the Association in hospital and medical journals.

In 1968 the NCWC was reorganized and renamed, becoming the United States Catholic Conference (USCC). The NACC ultimately became the division of Chaplain Services, Department of Health Affairs with Monsignor Murray as the Department’s Director.1968 was an important, eventful year for the Association and by the end of that year, the NACC had begun to fully develop into the organization as it is recognized today.

In 1969, the Advisory Board was dissolved as the Executive Committee assumed greater responsibility in the decision making process of the Association. Father McManus was instructed to hire a staff and assume all other responsibilities necessary in the formation of a permanent, centralized office. The annual membership dues were raised in an effort to provide greater financial support.

The Board of Examiners had been established by 1968 and assumed the responsibility for certification and accreditation of training institutions.

By 1970, the NACC had established itself as a recognized certifying and training organization. It had designed a training institute, which was being held twice a year, and it published educational material not only for its members but for anyone interested in the health care field. Certification by the Board of Examiners became an important criteria for many health care facilities in the hiring of chaplains.

The next two years saw a gradual refinement of standards and procedures of the Association. Standards for certification were raised and improved as was the curriculum for training programs. The office had begun publishing a bi-monthly Newsletter and its annual conventions were an important event attracting more participants each year. The American College of Chaplains, the Catholic Hospital Association and the Association for Clinical Pastoral Education (ACPE) were just three of the health-related organizations that recognized and communicated with the NACC.

In September 1972, Cardinal O’Boyle of the Archdiocese of Washington, D.C., announced that Father McManus was to be the new pastor of St. Michael’s Parish, Laurel, Maryland. Applications were submitted for his replacement and in January of 1973, Father David R. Baeten of the Diocese of Green Bay, Wisconsin, was chosen as the new Executive Secretary.

A major change took place in the Association in 1973 when the membership voted to admit sisters, brothers, and lay persons as certified members of the NACC. Discussion in this area had begun in 1972 and the resolution was given to the general membership to be voted upon. The vote was overwhelmingly in favor of the proposal and in March, 1974, the Board of Examiners began accepting applications for certification from the newly formed category, Pastoral Associates. By the end of this year there were 32 certified Pastoral Associates, 177 non-certified and one Acting Pastoral Associate Supervisor. The Pastoral Associates have shown themselves to be concerned, active participants in the NACC and in their short time within the Association they have a representative on the Continuing Education Committee, a representative position on the Board of Examiners and in the last Executive Committee elections, one of their members, Sister Bonnie Woods of Detroit, was chosen as the new Secretary.

The growth and development of the National Association of Catholic Chaplains into the respected organization that it has become has far greater significance than might at first be apparent.

For many years, the role of the chaplain was looked upon by many as almost an “out-post” assignment, not one which was actively sought after by priests of any age. But through the dedication of a few enlightened individuals . . . the chaplaincy has finally begun to be seen for the very special ministry that it is.

The NACC in its efforts to organize, educate and certify chaplains, has made even the chaplains themselves see their roll in a new perspective. The Association’s very existence offers many of these dedicated people an opportunity for learning and fellowship, and stands for many as simply a symbol of support and encouragement in their sometimes very difficult assignments.

When one considers the point at which it started, the NACC has made remarkable progress in its [first] 10 years of existence. But with the increasing enrollment and participation of its members, its future holds only the greatest of promise.

Click here to read the 40th Anniversary themed issue of Vision newsletter – July 2005. Included is a sample prayer service to use at your own anniversary gathering.

Click this link to read Bishop Dale Melczek’s letter to the members of the NACC on the occasion of the fortieth anniversary.
Here is a congratulatory letter from Most Reverend Wm. S. Skylstad, President of the USCCB. 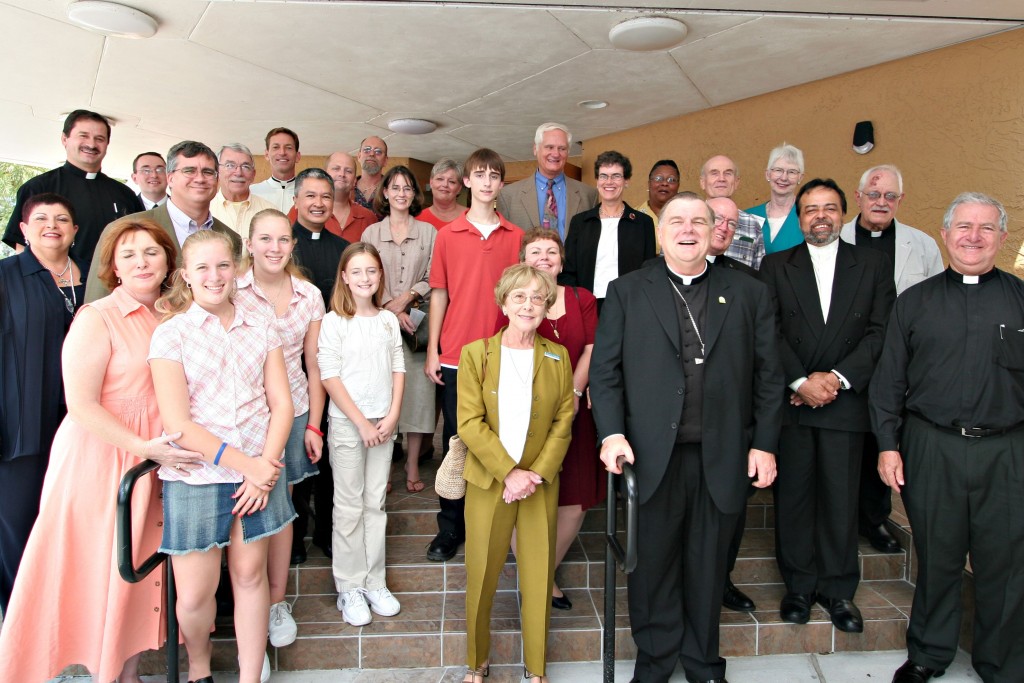 Pictured: Celebration organized by NACC member Maritza Ramos-Pratt and held at Mary Magdalen Catholic Church, Maitland, Florida on September 3rd, 2005.
Shown here is the group that attended the Mass at Mary Magdalen and stayed for a cutting of a big Puerto Rican cake that Chaplain Ramos-Pratt baked. Bishop Thomas Wenski and other members enjoy the celebration on a beautiful day, full of sun and a warm breeze.

Mrs. Ramos-Pratt is in the back, third from the right, in yellow.